I’m really liking the new Preview option on Google Mobile Search, and I reckon it will be used far more than preview in regular web search. But there’s a small problem. Well actually a couple of problems, but here’s the solution to one:

The above wont run showCntent() to Google’s PreviewBot. Why might you want to do this? Well I like to run surveys on some sites to gather qualitative feedback. I tend to use 4QSurvey.com for this (free, easy to set up, and gives great insight). The last thing you want is PreviewBot showing your website with the lightbox questionnaire, so it’s easy to block out. This is the code I use to load 4QSurvey asynchornously:

Haven’t figured out what big changes there are yet, but there are definitely differences.

Sitting in an airport, and just noticed that Google has updated their horrible “Your computer may be infected” sorry page with this more useful “Stop scraping us” screen: 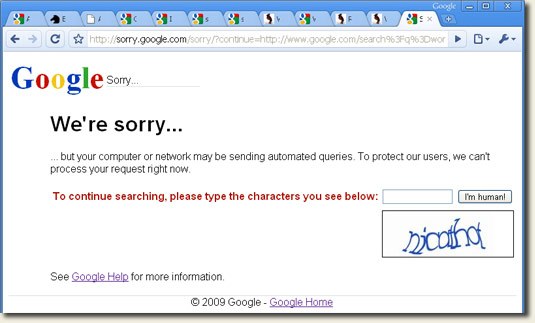 I suppose it’s a whole lot more useful than the old “your computer may be infected” screen, but I wonder if maybe this uses a new detection method? I’m sitting in an airport lounge using wifi, and I’m not sending any automated requests.

I’ve noticed that quite a few others are making 2009 predictions. I’ve never been big on such hockery-pokery, but that said I have a few thoughts on what might happen to SEO/SEM in 2009:

2008 was a weird year – I’ve seen/learnt more than in any previous year, yet I’ve not been blogging much about it. I could probably write as book about what I’ve observed/done in 2008 – some really fantastic things.

And I’ve been speaking to a few people about that point recently. So my New Year’s resolution is to try blogging a lot more in 2009.

At least until I flip the switch that is :O

I’ve been watching recent changes to Google’s universal search, and the steady increase in the number of Google Books results. I was doing some research for the Fitzwilliam Institute Lecture and found this beaut: 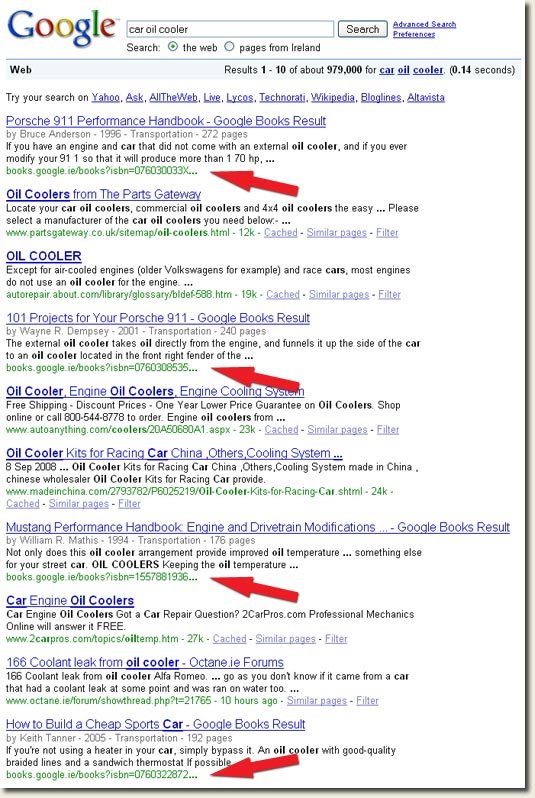 If you aren’t familiar with Google Book results, they are actually not really part of the organic results, but instead injected into the SERP as part of Google’s Universal Search. But I think this is a pretty good example of Universal Search working really badly.

Of course the sceptical folk out there might also mention that each Book Search result pushes another organic result off the page, and potentially forces one more site into paying to appear in Adwords…

I’ve been meaning to write about this for quite some time. In my opinion this has the potential to really rock the boat for multi-language, multi-country SEO. In fact had this feature rolled out fully last year it would have been high on my personal ‘Top SEO Stories of 2007’. It is the new Geotargeting function within Google Webmaster Console. 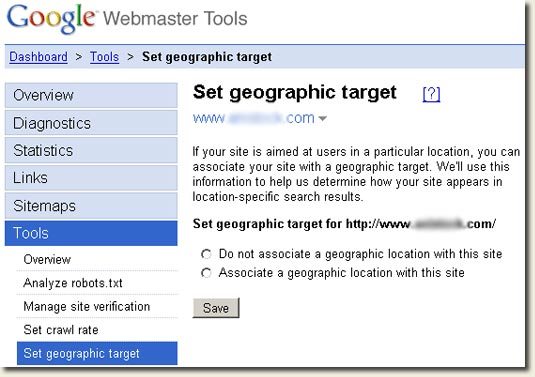 What is Geo Targeting within Google Webmaster Tools?

Released with little fanfare in late 2007, the Geotargeting tool has the potential to change the way companies plan their multi-country SEO strategies. I briefly mentioned the Geo Targeting tool previously, but from the official release:

Starting today Google Webmaster Tools helps you better control the country association of your content on a per-domain, per-subdomain, or per-directory level. The information you give us will help us determine how your site appears in our country-specific search results, and also improves our search results for geographic queries.

So whereas before you had to either use ccTLD or server IP location to inform Google of your preferred country level index, now both of these requirements have become redundant.

If you watch Mike McDonald’s video interview with Vanessa Fox and Matt Cutts at the PubCon there’s an interesting discussion about the Geo Targeting tool. Here’s the two most relevant lines:

VF:…and a lot of sites have been really wanting this, especially global brands who aren’t able to have a separate domain or a separately hosted site in each country, you know they’ve just got one site that maybe they em, have you know -en, -de, -es, whatever. So now they can go in an specify each of those for their individual countries…
MC:Yeah, we definitely hear, especially big sites that have lots of presence in different countries, but all on one domain – it’s a huge help, because there really wasn’t a solution for that before and now they have a good alternative.

But they neglected to mention one very important issue with the new Geo Targeting tool.

At PubCon Google hosted a ‘Meet The Engineers’ event. I managed to track down not one, not two, but three individuals who work directly on Google Webmaster Tools. I mentioned the bug reports I’ve left on the Google Groups, and mentioned that the tool didn’t seem to be functioning as promoted.

The response? Depending on who I spoke to the tool was either ‘slightly’ broken or ‘really’ broken. And I think this fact is borne out by the complete lack of chatter from people who’ve successfully benefited from the Geo Targeting tool. Of course no official proclamation on this from Google as of yet.

I fully believe that this tool will become fully operational, and when it does it will have profound affects on many organic niches, most especially so in Google’s country level search properties.

I’m pretty sure that this tool will become immensely important. I’m going to put together a small tutorial that explains both who can use the Geo Targeting function (it’s not available to everyone), and how to use the tool to best effect on your site. If you’re interested in this tutorial you can sign up to my feed and be alerted as soon as it’s published.

One of those odd quirks you get when an algorythm attempts to apply categorisation to web content: 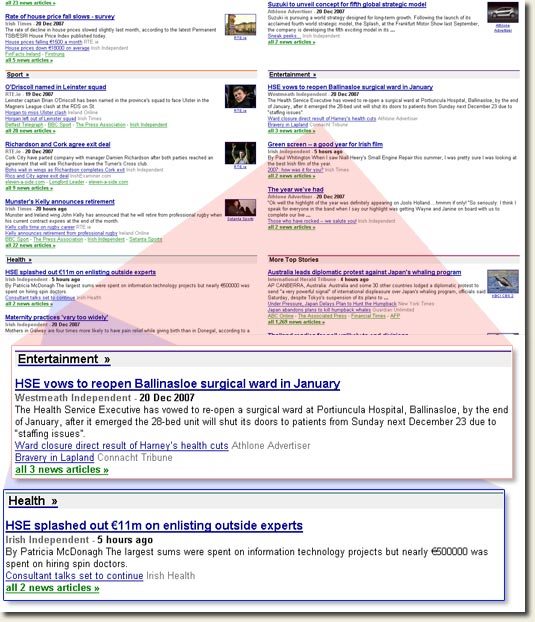 If anything those stories would have better relevance if they were swapped over IMO.

I suppose there’s a certain irony in this categorisation (you wont get this unless you’re Irish or have had the fortune of interacting with the Irish Health System). But it just goes to show that algos have a long way to go before they can really ‘get it’.

Anyone else seen any queer results in Google’s Irish News aggregator?

Posting has been non-existent here for the last while – work, work, work, sleep, event, event with Dave (we had good craic at that), sleep, more events with Damien, more work….

But this little tidbit is worthy of breaking the hiatus – Local Business Center is now available for Ireland: 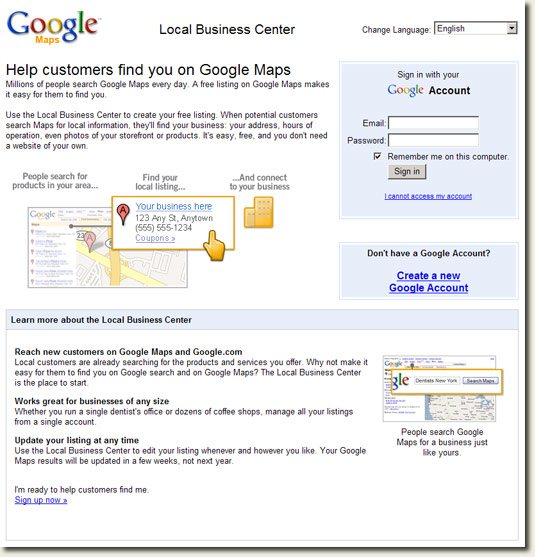 Earlier this year I wrote wondering when Google Local Listings might finally arrive in Ireland. Well yesterday I noticed Ireland in the drop-down, so went through the registration process. 2 minutes work and an SMS validation gateway at the end for real simplicity: 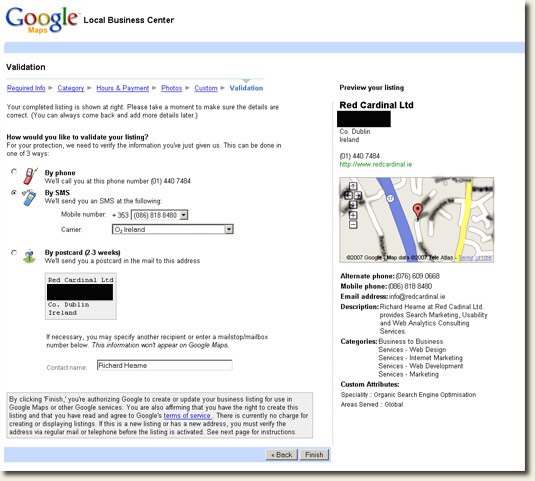 This along with the recent updates to geo-targeting abilities in Google Webmaster Console for non cTLD domains, it looks strongly like we’ll be getting much more blended results in Google.ie results pages.

If you have a business which serves a set geographic area (e.g. restaurants) you should go over and create your local business profile ASAP.

Quite sure that the exported Toolbar Pagerank we’re seeing now is pure FUD.

Some of the sites I’m working on (and have access to substantial data) have been awarded PR5 with little or no backlinks pointing at them.

If this isn’t a monumental cock up, then I’m 100% confident that Google is lying about the true value of a certain small green bar.

Turn the bloody thing off…

So while checking why Damien would be ranked number #1 for ‘Irish sluts’ I noticed that a spam outfit have knocked Damien off his pedestal: 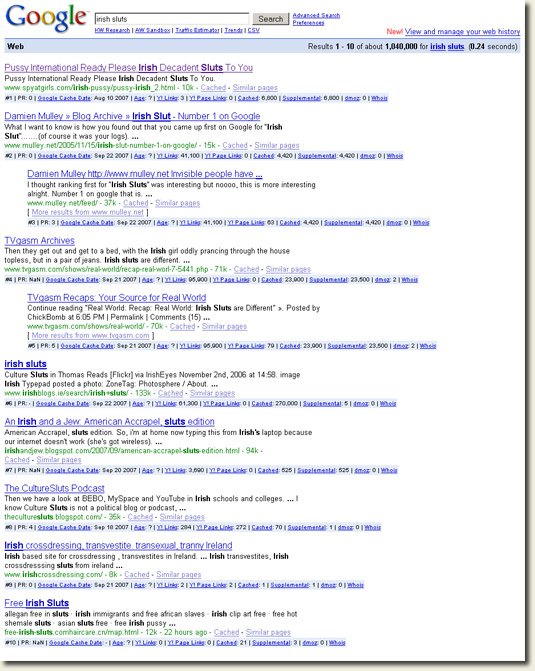 Curious thing is that Google seems to have been well and truly spammed with that number #1. Hidden text galore and some cute uses of JS to obfuscate text.

Yahoo!doesn’t even show a single link pointing at that page.